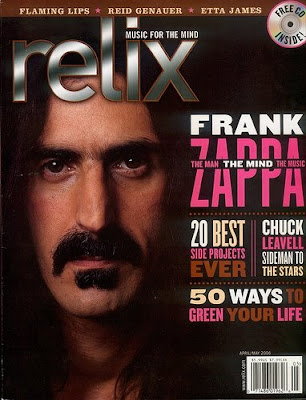 While I thought someone would pick up this story today, I guess we'll break it now at 5:55 p.m. (It's kind of like no one showing up for your funeral.) Just as The Dead are set to reform and head on the road, the one-time Grateful Dead fanzine has officially gone the way of its somewhat peers No Depression and Harp, and probably a slew of other magazines no one really cared about anyway. We hear Vibe may not have enough to put out their next issue either. I'm sure there are countless hippie jokes to make here, but we always thought they were fairly harmless and well-loved by their loyal readers. Goodnight, sweet prince.

As things seem to be progressing rather quickly with this story, Relix editor Josh Baron earlier commented to Idolator that Relix will indeed keep publishing. From our sources, we are still hearing news to the contrary in the form that Relix will only print one more issue.
Dictated but not read by StarkNY at 5:54 PM

If you're really quiet you can hear all the hippies crying small hippie tears.

At least Zappa is still amazing.