...For the Whole World to See 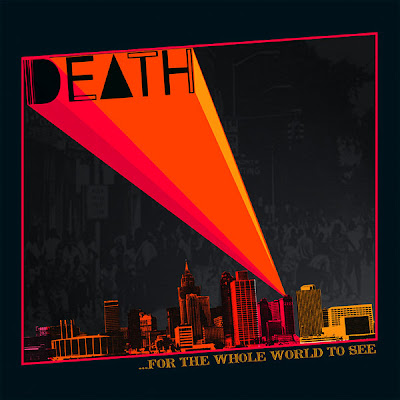 To begin, I must state that I am no expert on the chronology of punk music. Outside of the heavy hitters (The Jam, Clash, Stooges etc...), I can't really say I listen to all that much early punk rock. Yet, this reissue of Death's lost 1973 record ...For the Whole World to See is blowing my fucking mind. I'm sure someone out there can recite to me a litany of bands that Death either drew from or influenced, but I feel no compulsion to do that here. There are, of course, elements of punk fundamentals on this album: speed, punchy bass and simple chord structures; but there is something so transcendental about this record that it ceases to be of a certain era or a certain genre. The songs are visceral and moving, and the lyrical content is poignant and meaningful. There is even a freaking drum solo on the track "Let the World Turn." These three brothers from Detroit (Dannis, Bobby and David Hackney) somehow nailed it, and we thank Drag City for getting this back out there. Our new friend from Other Music, Mikey (I think that's his name) has even been so inspired as to start a facebook page for the record. Join up, and buy the record - I'm talking like, within the next hour.

Email ThisBlogThis!Share to TwitterShare to FacebookShare to Pinterest
Labels: ...For the Whole World to See, death, Drag City, The Clash, The Jam

Loved it! Hey mind if we post it on our new blog?