Yo-Yo No! They Weren't Playing! 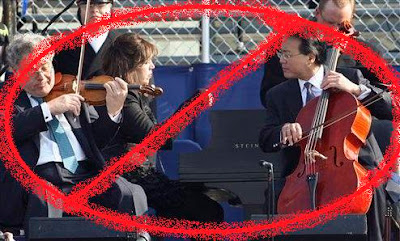 (Regular photo courtesy of Idolator)
The Inauguration was a fraud.

It took Obama two tries to get sworn in and now we find out that Yo-Yo and crew pulled an Ashlee Simpson. That's right, they weren't actually playing on Tuesday afternoon; it was too cold. Idolator reports: "Truly, weather just made it impossible,” inaugural flack Carole Florman told The New York Times. “No one’s trying to fool anybody. This isn’t a matter of Milli Vanilli." Well I guess we didn't want President Obama closing his eyes in music-induced euphoria, to out of tune instruments; so why not just fake it. So they did.
Dictated but not read by thestarkonline at 11:19 AM