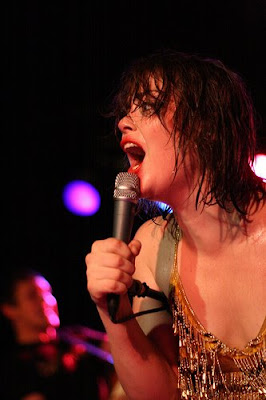 Photo Credit Bill Shouldis
The reviews have begun to trickle in from last night's show and the resounding consensus is that Ida Maria is one of the new rock elite. We can only nod and agree. This Norwegian pop/rock/punk star has the power and rasp of Janis Joplin and Karen Dalton and the swagger and stage presence of Mick Jagger. Although her music hardly resembles any of the above - it's Maria's whiskey and cigarettes growl and the purely sexual nature of her performance that makes all the difference. Already part of upcoming features in Blender and Rolling Stone, Ida Maria's performance last night at the Mercury cinched her elite status for us. Pouring a bottle of water over her head before the closer "Oh My God" Maria, with slick backed hair, danced screamed and owned the stage - winning the adoration of her audience. Honestly, she has one of the best rock screams we've heard in a LONG time. Her single "I Like You So Much Better" was the clear favorite, but other songs such as "Stella" and "Keep Me Warm" showed she isn't just a one hit wonder. Ida Maria is indeed the real deal; and as she states: "Do You Have Room For Me? I'm the Queen of the World." Not queen yet, but maybe soon.

Dictated but not read by StarkNY at 4:13 PM