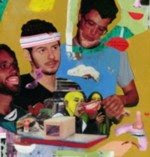 Finally, a list that makes some sense. It's no shocker that I (Matt) share a lot of tastes with Chris at GVB. I don't want to speak for our other writers here, but I love a lot of the records on this list. Yet, I can't say I would put them all as high as he did, especially Little Joy. That's cool, though. There are certainly some great under-the-radar records here ( i.e. Grouper...) so if you haven't checked these out yet, make sure you do. After the jump is the write up for GVB's #1 record, the awesome Exposion from White Denim and the rest of his top 20. Texas favoritism? Wish I could say so, but the album is too good.
White Denim - "Sitting" - mp3

While Workout Holiday was garnering praise from just about everyone in the UK (the BBC, The Independent, Rough Trade, the Observer, et al.), White Denim quietly released their U.S. debut LP, Exposion, here in the states on Austin's fledgling Transmission label. To be real, I love both records immensely and either could be in this spot, but the slightly different sequencing and the addition of "You Can't Say," "Migration Wind," and the new extended version of "Sitting" (a song of the year candidate) give Exposion the slight edge, and offer a glimpse at the band's transition into slightly smoother waters without sacrificing a bit of the raw power, intensity, and sheer athleticism of the WD live show. Any and all conceivable hype aside, these guys were the best band in America in '08. [buy]

If there's one record that's going to be on everyone's list, it's Nouns.