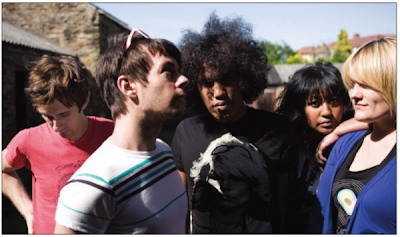 Black Kids - "Not Gonna Teach Your Boyfriend How to Dance" - mp3
We've been following the Black Kids' rise to power this year on the back of their Columbia debut Party Traumatic, which proved a fantastic single-filled summer '08 soundtrack. We even spoke with drummer Kevin Snow before they embarked on their massive tour. While we missed their show at Santos Party House several months ago - we're going to be catching them tonight at Webster Hall. Also very enticing is the inclusion of the Virgins on this evenings bill. If you haven't checked them out, make sure you do.

In case you've been living in a cave - the Black Kids' "I'm Not Going to Teach Your Boyfriend How to Dance with You" is above. Tix are still available for tonight's show.
(photographed for SPIN Magazine by Fergus Padel)

and come to the after party for a black kids dj set w/ purple crush and mike genius and famous friends....