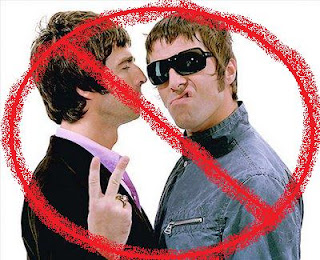 Deerhoof - "Chandelier Searchlight" - click for mp3 via VIRB
Earlier in the year, in a truly creative and inspirational marketing move, Deerhoof released their first single in the form of sheet music. Now here comes Oasis and issues THEIR first single on sheet music. I guess they don't just rip off the Beatles exclusively. What makes it worse is that The Irish Times picked up the story and called Oasis "more innovative than Radiohead." Despite the success of their first two records, Oasis hasn't been able to market their way out of a paper bag in the past decade, let alone make a good record. Moves like this are the reason America hates you Oasis.

See after the jump for Deerhoof's new video for the song "Chandelier Searchlight." Their LP Offend Maggie is out now on Kill Rock Stars...highly recommended. NOT recommended --Oasis' crap new record.

Dictated but not read by StarkNY at 7:01 AM

ehhh, deerhoof wasn't the first band to do this. i know alkaline trio did it earlier this year, around march or april, and i'm sure others have done it before them. but oasis getting the credit for it is kind of lame.

oasis sucks. this just proves it.