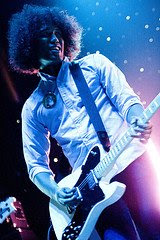 Not that we had low expectations for the Black Kids last night, but let's just say we weren't really expecting to see anything that earth shattering from our Jacksonville friends. Yet, somehow we found the words "fat synths" "Robert Smith-esque vocals" and "killer dance moves" floating through our heads during the performace at Webster Hall. Was this the same band whose live performances were resoundingly panned during last year's CMJ? Could this be the same off-key back-up singers and metronome-craving drummer we heard on the Wizzard of Ahhs EP? Somehow Columbia molded these five budding musicians into a real damn band. The girls were great - one could even say the highlight - and our boy Kevin Snow held down the time like a champ. 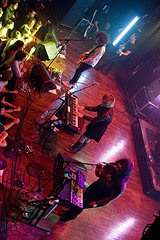 The one thing these kids have always had were well written songs. No matter how jaded you are, or how much you hate the whole scene - you shouldn't be listening to music if you can't tell that these are well crafted pop songs. And last night, the Black Kids came out, rode the strength of those tunes and nailed the shit out of their show.

Dictated but not read by StarkNY at 1:41 PM