Sasha Frere-Jones speaks with Gothamist, Offers His "Best of 2008" (So Far) 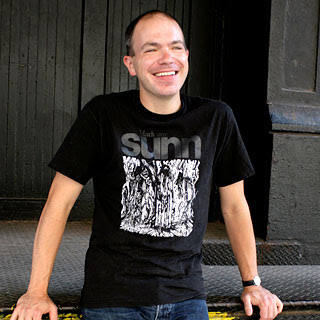 (Photo:www.mediabistro.com/fishbowlny/original/15_sasha_lgl.jpg)
We came across an interesting interview with New Yorker music critic, Sasha Frere-Jones. Hosting a New Yorker dance party on Friday, NY's Gothamist posted up with Frere-Jones to get his thoughts on the event, his current musical tastes and music making with Ui. Most interesting, to Stark at least, were Frere-Jones' "Best of 2008" picks (so far.) The interview follows after the jump.
Click here for "Best of" picks.

"There was a time when one might have been surprised to find an article about, say, Girl Talk nestled within the fussy pages of The New Yorker. But for years now Sasha Frere-Jones, the magazine's pop music critic, has been broadening the magazine's appeal with his perceptive and funny observations on everything from Radiohead to Coldplay. (Ha.) (See also: Miscegenation.) Jones is also that rare breed of critic who actually creates in his field of interest; his band Ui has been a presence in the downtown avant-rock scene since 1990.


For the third year running, Frere-Jones will play host at the New Yorker Dance Party on Friday night at Hiro Ballroom. The evening, which is part of The New Yorker Festival, features next-level hip hop remixers Megasoid and a long, sweaty DJ set by Ghislain Poirier. Tickets are sold here, but you could also go for free by winning the Meltdown Playlist ticket contest, in which contestants compete to create the best playlist of dance songs "that is suitable for an economic meltdown."


What does hosting a New Yorker dance party entail? Embodying the brand, incentivizing customers, and helping our partners to vision new models for connectivity. Or getting drunk. I haven’t looked at my contract.


Who is Ghislain Poirier and why are you pumped for his appearance? He gave me a t-shirt once. (He gave me the shirt after I gave him fifteen dollars but he was REALLY nice about it.) He makes dancing people want to dance so badly that even while they are dancing they want to be MORE DANCEY so they text their friends and force them come and dance with them. (I like dance parties to be somewhat cathartic.) Also, Ghislain is a French Canadian, and French Canadians need our support. Or maybe we need theirs. Either way, it is time to build a Bridge To Somewhere.


At the first two dance parties, Michael Mayer and Diplo played uptempo sets. This year, I wanted some slow beats. Ghislain is nice with any beat in the world, but his comfort zones are dancehall and hip-hop, so I think we’ll get some lower BPMs this time. I also wanted Ghislain to play the festival because I spent approximately three full days learning how to pronounce his name.


Ditto Megasoid. They have the power to kill.


What other music have you been enthusing about lately? Right now I am listening to the new Megasoid mixtape, “Remix Runners,” which we will be hosting on the New Yorker site exclusively next week, along with the new Mofomatronix mixtape. For the rest, go to this list, which is updated in a very annoying and irregular way.


Are you still making music with Ui? We are practicing now, writing new material, relearning old songs and looking for two more musicians to join the band. Our records are hard to reproduce with only three people. If you know anyone who can play well and likes boring, repetitive music with no vocals, please tell them to join a real band. Everyone else can apply.You’re selling off your record collection.

Are you going 100% digital now? I am selling most of the vinyl. I am keeping a small collection. A stack of sixty boxes in Manhattan Mini Storage was costing me money and generating no pleasure. Five boxes at home will get played. I spend plenty of time with digital sound at the office. Home time should be special time.

Did you go to All Tomorrow’s Parties in the Catskills? I don’t do well at festivals. If I am affected by a live performance, I like to step aside and process what I’ve heard and seen. Having many acts play short sets one after the other doesn’t serve the music; it just allows concert promoters to charge high ticket prices and set up concessions to fleece a crowd whose experience has been engineered to make them increasingly tired and thirsty.


Why does nobody love The Concretes as foolishly and irrationally as you do? I DON’T KNOW.


What neighborhood do you live in? Pros/cons? I grew up in Brooklyn and moved to Manhattan in 1988. I arrived where I am now—between the financial district and Battery Park City—in January of 2006. The building is a killer piece of early 20th century architecture, and the people who run the building are lovely. The neighborhood is a shit sandwich, though. Everything is under construction. My kids have to dodge debris any time the wind builds up. (Along a river, that’s not rare.) It is never clear which streets will be open. There is some semi-official lady in an orange vest who stands in front of the building and screams at any vehicle that tries to stop, even briefly. The park areas that stretch up from the Ferry to Houston Street are gorgeous and often not crowded. If the construction wasn’t making me so grouchy, I would sing their praises more loudly.


What are your favorite places for live music in New York? Union Hall: The downstairs is tiny and every show feels like a telephone conversation. And? BOCCE. Joe’s Pub: I can sit down and eat. Market Hotel: I sweat so much that I have no choice but to enjoy the music because there is absolutely nothing else to enjoy.


How about a good New York story? Ui used to practice at a space on Baxter Street run by David Linton, the very awesome downtown NYC musician and superlegend. He was something of a mentor to the band, and played samplers with us for a while. He started a night called Haus of Ouch, where DJs would DJ and bands would play. I designed the flyer and would sometimes DJ. Ui played once, as did other bands that practiced there, like Blonde Redhead and Soul Coughing. Eventually, the Soundlab crew started having their parties there. One night, John Lurie showed up. He argued about paying the five dollar entrance fee. Once he got in, he went over to a red light bulb that he apparently objected to, and unscrewed it. Part of me thinks that was the most douchey entrance I’ve ever witnessed, and part of me thinks it is the essence of New York, and therefore perfect.

If you could change one thing about New York what would it be? It’s happening. Thanks for stopping by, bankers. Don’t let the door hit you etc etc."

~Gothamist
Dictated but not read by thestarkonline at 12:45 PM