Mogwai - The Hawk is Howling 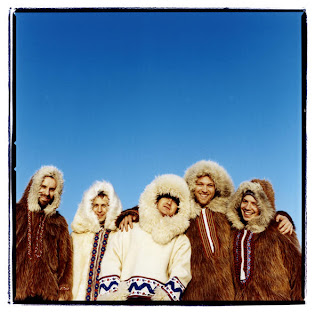 Mogwai are in a tough place: an instrumental group releasing their sixth album, not including the band's plethora of EPs and singles. The musical landscape has changed since 1996 when they exploded out of Glasgow with their, at the time, new "post-rock" sound. Their "it" band status was replaced by new-comers flying emo and folk-influenced flags. It is easy to toss off a new record as "more of the same," but as with any type of artist, it's these mid-career albums that often define your legacy.

The Hawk is Howling opens with, "I'm Jim Morrison, I'm Dead." The track is lacking however, and will most likely be remembered more for its title rather than its substance – albeit the symphonic feel does serve a purpose – it announces the band's arrival and puts the listener in the proper mental state needed to enjoy a Mogwai record.

Track two, "Batcat," proves to be an electrifying album highlight reaffirming the group's prowess and showing their metal influences. Post-rock has always been about combining loud and soft –no other band seems to capture the brutality of the loud while avoiding metal cliches as well as Mogwai. This is perhaps their greatest influence on younger bands like Explosions in the Sky per se.

The album continues with "The Sun Smells Too Loud," an uplifting, shining moment, with a retentive but swinging drum pattern that sets the foundation for guitars, synth and glockenspiel. The tune blooms into a seven minute head-bob before bubbling down and drifting seemlessly into the piano laden, "Kings Meadow;" it's a beautiful shift in tone. These are the small moments that you have to appreciate with a Mogwai record. Even with all the noise, it's usually these quiet details that pull it all together and deliver the emotional impact. If you don't have the patients for these moments, a record like this probably won't work for you. Sigur Ros excel at those shifts in tension (better than Mogwai) and they create more of them. Mogwai's short-term payoff can be better though as the sound-spectrum is broader and they reach a level of "rock" in which Sigur Ros often times falls short.

The questionably titled, "I Love You, I'm Going To Blow Up Your School", creeps in with piano and glockenspiel before building into a wonderful, processed guitar sound and wall-of-noise that seems to get cut short. I was left wanting another three or four minutes, but I guess that's a good thing.

The album falters a bit with two tracks that are little more than standard fare, but rebounds nicely to close with a volatile, rhythmic dirge titled, "The Precipice."

The Hawk Is Howling is a rewarding listen with dynamic shifts in mood that overshadow the few languid moments. The band has done its legacy proud and remain a stoic, unflinching entity, capible of weathering the storm of popularity and musical trends.

Dictated but not read by thestarkonline at 3:06 PM

Email ThisBlogThis!Share to TwitterShare to FacebookShare to Pinterest
Labels: Matador, Mogwai, The Hawk is Howling

On behalf of Wall of Sound / PIAS, Matador Records and Mogwai, many thanks for plugging “The Hawk is Howling” (release date 21st September) ... .. thanks also, on behalf of the artist and label, for not posting any pirate links to unreleased (studio) material and, if you / your readers want good quality, non-pirated, preview tracks, then full-length versions of “The Sun Smells Too Loud” and other, exclusive previews are available for fans and bloggers to post / host / share etc in the run-up to release at http://www.matadorrecords.com/mogwai/music.html ... .. do also check-out www.mogwai.co.uk and www.myspace.com/mogwai for news and info on the new album and the band’s 2008 shows.

Thanks again for your plug.