The Gaslight Anthem - Rock Band of the Year? + mp3 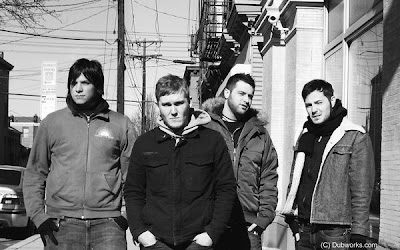 While spinning the new record The '59 Sound from New Jersey's The Gaslight Anthem, I found myself wondering, is this America's next great rock band? After days of listening and researching, The Gaslight Anthem remain a mystery to me. Half of me sees visions of a denim-clad Bruce Springsteen at his worst, singing "Glory Days" in a bar and pitching baseballs in Jersey... I shudder. Yet, the other half, the half that is winning out, sees a regular pub-rock band writing infectious songs about lost love with that sort of teenage wistfulness Springsteen captured so well in the beginning stages of his career.

Buzz has been building around Gaslight , but I can't seem to figure out where it's coming from. The major blogs haven't touched them, and I've yet to see more than a mention in a large publication. Yet, people have been emailing me asking if I've listened to them, and they are now in the top sellers on emusic. Good music has a way of getting heard I guess. No matter how many times I've questioned them, I've found myself reaching for the record, willing to endure the visions of Courtney Cox dancing in my head. I encourage you to listen and judge for yourself. It may just be that refreshing breath of wholesome American rock you've been missing since you were 16.