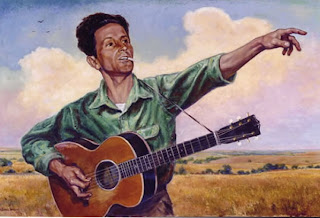 Woody probably hated his birthday. Why not right? If it was somehow deemed going against the norm, something worthy of a song or plain rebelliousness, Woody would have partaken.

There is not much to say about Woody that hasn't already been said by people who can probably say it better than most — see Seeger, Dylan, and most folk troubadours. From his days as a boxcar jumping, hot-rock toting miscreant, to his musical maturation alongside that of a nation, Woody lived by his own mantra — "take it easy — but take it."

Woody's music was his will, something passed along, dragged in the dirt, beat up, broken down and rebuilt with more character. Not many know that "Turn, Turn, Turn," and "This Land is Your Land" were penned by Woody himself — I think he would have wanted it that way. As Dylan wrote:

"Hey, Woody Guthrie, but I know that you know/All the things that I'm a-sayin' an' a-many times more./ I'm a-singin' you the song, but I can't sing enough,/Cause there's not many men that done the things that you've done."

After the jump.
Dictated but not read by thestarkonline at 1:35 PM