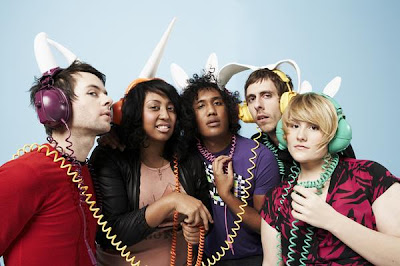 The Black Kids' "most blogged about release" Partie Traumatic drops today courtesy of their new home label Sony/BMG. Coming up on Stark in the next day or so, Vince will speak with drummer Kevin Snow about the Kids' swift rise to fame, their mamouth upcoming tour and what sort of pressure they were under while recording the new record.

The marketing campaign is firing on all cylinders this week in New York as the Black Kids will be playing at Virgin Megastore tonight, David Letterman on Thursday and to a packed Santo's Party House on Friday with Miles Benjamin Anthony Robinson. The full album is also streaming free at AOL now...
Dictated but not read by StarkNY at 2:10 PM