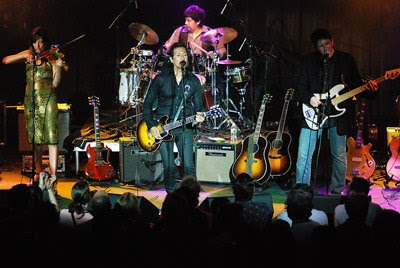 On Wednesday night at the Highline Ballroom, Alejandro Escovedo took his well-deserved victory lap through New York City.
After what has been a whirlwind year for the longtime road warrior (he's 57), Escovedo played with the passion and exuberance of a 20-something touring behind his new smash-hit record. 2008 has found Escovedo playing with the Boss, releasing his 12th solo album Real Animal (Back Porch/Manhattan), charting at #122 on Billboard's top 200, #3 on the Heatseeker chart and selling 6,178 CDs in the first week.

Last night, Escovedo showed fans why people have been raving about him all these years. His six-person band tore through many of the songs off the new record. Opening with the single "Always a Friend", Escovedo & Co. played with tasteful recklessness and a strong dose of genuine happiness. The set plowed along with brute rock force, yet one was left wanting more of the nuanced-southwestern feels Escovedo is known for. Although the set contained the classic "Rosalie" it also seemed to be lacking on some of his older material. Alejandro's band has finally found a nice balance between the all-string arrangements of the past, and the all-rock incarnations of the more distant past. Overall, it was a pleasure to watch Escovedo, who has overcome a well-publicized near-death experience from Hepatitis C, play his Stooges influenced new songs with contentment and joy. 2008 has been a year of rejuvenation for Escovedo, both in his health and career.

One can only hope this upward swing of momentum continues for a musician who has earned every accolade and record sale over his 30-plus year career. Here's to Alejandro Escovedo becoming a cult act no longer.

Amazing show, I too would have liked to hear a few more older songs. Rosalie was the best version I've heard, the mix of instruments was perfect. Other highlights, "All the Young Dudes" and "Everybody Loves Me".