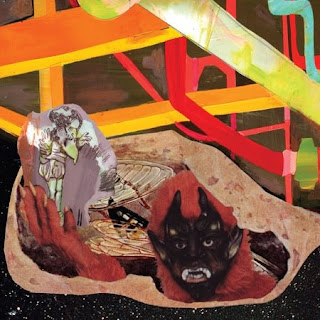 Wolf Parade - "Call it a Ritual" - mp3
Yes, yes. We are all aware that Dan Boeckner and Spencer Krug, the two frontmen of Wolf Parade, are two different songwriters, rocking two separate styles, and heading two different side projects. Why this seems to be bumming some critics out with regard to the new Wolf Parade album is perplexing. Perhaps it's because I was joyfully mucking around in Apologies to the Queen Mary for months before I even discovered Sunset Rubdown or Handsome Furs. But the lack of cohesiveness some people are wringing their hands over is what I always thought everyone loved about this band.

The new album, by the way, is fantastic.

MORE AFTER THE JUMP...
"We are not at home," they insist, on "Language City", one of the album's best. Yet it's hard to imagine them not feeling pretty damn at home among the ornate arrangements, varied textures, and well, the pretty fantastic art created on this album. It's interesting. Some songs are drum-driven with the guitars taking a pleasant melodic, rather than rhythmic role - sometimes the keyboard is the star of the show. Furthermore, while I'm usually annoyed by a 6-minute song, (unless it's a 10-minute epic statement, you can usually say what you want to say better in 3), "California Dreamer" proves me wrong. And big ups to drummer Arlen Thompson for nailing the production of the album.

To be sure, the album has it's SNAFU's. "The Grey Estates", the 6th track (my lucky number!) is disappointingly irritating in every way. But "Animal In Your Care" is lovely, starting out fractured and brittle, though ending up beautifully defiant. "Kissing the Beehive" is the perfect 11-minute-album-ender, and some sort of proggy-amazingness.

Dan, Spencer: your band is big enough for the both of you. Too many cooks don't spoil the broth, they just make it more interesting.

P.S. if you weren't planning on seeing Wolf Parade in July, listen to the album and get back to me on that. I hear they added a second show. Who's coming with me?

Tara McCarthy--Stark Contributing Writer
Dictated but not read by StarkNY at 2:07 PM

I guess you can go back to your Vampire Weekend in peace now you made that expertly crafted opinion known.