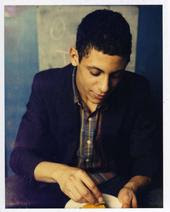 Following a recent cover feature in Fader and his newest self-titled album release, 24-year-old Miles Benjamin Anthony Robinson (why not?) is beginning to build momentum. Robinson, originally from Oregon, now resides in Brooklyn, playing rock/folk-style music reminiscent of his Northwest upbringing; but he plays these songs through an atmospheric haze that sounds very much like a product of Brooklyn. Assisted by members of Grizzly Bear and TV On the Radio, Robinson has found the right friends and luckily he has the songs and talent to match. His backstory is filled with strange trips through Vegas with his comedian father, addiction and a Grandmother who, upon his birth, stated that Robinson was "the oldest soul in the room." She died that night. We're talkin' true-blue American mythology stuff here. Here is a track - and make sure to keep an eye out for him this summer.
Miles Benjamin Anthony Robinson - "Bruiedfed" mp3

Dictated but not read by StarkNY at 10:02 AM