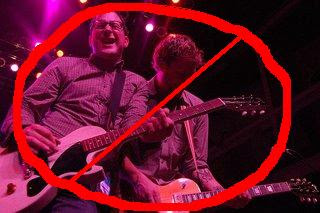 The Hold Steady sold out.

I'm sorry to say, but yes, it's true. The Tribeca Film Festival recently went over top of Bowery Presents to book The Hold Steady at Webster Hall. Those unfortunate enough to waste $15 last Friday night saw a rock show that ended at 9:30 p.m. Are you serious? The Hold Steady took the stage around 8:50 p.m., played for 40 minutes, then walked off, never to be seen again. Fans didn't leave in such a fashion. Everyone thought the band's exit was part of an elaborate encore. Then roadies began to break down the gear and fans began to break down as well. Grabbing anything in sight, angered and outright cheated Hold Steady followers began berating stagehands. Full beers, empty cups and gum found their way on stage all while "Fuck Tribeca" and "Hold Steady" chants echoed like that of a European soccer stadium. People were pissed off.

The pseudo-rioters then took to the streets, where fans drunkenly banded together to offer their ill-tempered sentiments to Tribeca officials stationed at the venue door.

You got it wrong, Tribeca. The show was poorly organized and outright embarrassing. Tickets were not even checked upon entrance.

Bowery Presents must have had a good laugh about this one, but Hold Steady fans did not.

Dictated but not read by thestarkonline at 12:35 PM

FYI - the Hold Steady wanted to keep playing, but Webster nixed it because of their rave club downstairs.