‘83-‘84 were important years in the advancement of my music appreciation. I started high school and good fortune put my locker next to a sophomore with an enthusiastic ear for College Rock. I'd grown up, as every good Midwesterner does, with a keenness for the Who and AC/DC. When this kid started giving me records by R.E.M., Hüsker Dü and the Dead Kennedy’s – I was liberated by the brash new sound.

I remember, vividly, going to the record shop and buying the Replacements, Stink. I had only heard of the band, never actually heard their music. I bought Stink because it was cheap (the fact that it had a song called "Fuck School" aided my decision). When I got home and put the record on, somehow, it was better than I could ever imagine. My musical curiosity had just become a lifelong obsession. 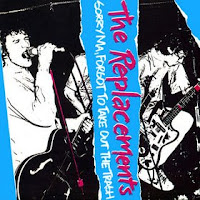 25 years later (?!#*) the chaotic appeal of the band’s first four albums is untarnished. Singer Paul Westerberg, brothers Bob and Tommy Stinson, and drummer Chris Mars, created a unique rock yet to be duplicated. Their debut, Sorry Ma, Forgot to Take Out the Trash, is a visceral, joyous mess. A youthful collection (Tommy Stinson was only 15 at the time) of songs from a band learning to combine a love for punk (“Takin’ A Ride”, “Careless”) and shambolic Stones influenced rock (“Johnny’s Gonna Die”). It’s a very cohesive set, despite its underwhelming technical achievements.

They followed up Sorry Ma… with the above mentioned Stink. It exposed the same themes (“Kids Don’t Follow”, “God Damn Job”, “White and Lazy”) and overall, did little to expand their sonic palette. Yet there was a hint that lead singer (and main songwriter) Paul Westerberg was gaining confidence in his craft. A fact that would start to bare fruit on their next album, Hootenanny.

By 1983, the Replacements had released two albums, but received little attention outside Minneapolis. Hootenanny is the record that started their growth on a national level. This is somewhat surprising since it’s their most schizophrenic. The Stones-influenced rock is still there, but much of the punk is gone. In its place are country, folk and even surf music. What the album does have, are the first two seminal Westerberg tunes; “Color Me Impressed” and the brilliantly lo-fi “Within Your Reach”. The songs brought melody to the forefront and showcased the emotive lyrical play that would become Westerberg’s trademark. They also gave the band an identity. One they would spend the rest of their careers perfecting and destroying. 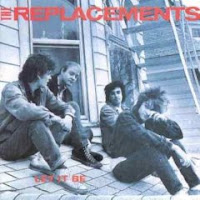 This identity is at the core of 1984’s, Let It Be. Considered by most to be the bands high water mark (I may argue for 1985’s, Tim, but…). Everything is elevated. Gone are the rough-around-the-edge arrangements played by ragged musicians. In their place are wonderful songs performed with a swagger that helps define them. Westerberg’s songs far outweigh his previous. He grabs your attention with the rockers, “I Will Dare”, “Favorite Thing”, “Seen Your Video” and breaks your heart with the ballads “Androgynous”, “Unsatisfied”, “Answering Machine”. On the latter, a frustrated Westerberg sings accompanied only by a guitar and the repeated recordings of a telephone operator. It all adds up to an instant classic that tells the bands ramshackle tale.

The Replacements would go on to sign with Sire Records and release four more almost-legendary records —never quite achieving the stardom that everyone seemed to think was headed their way. But the impact of these first four records can’t be denied. Along with R.E.M., The Replacements are the most influential and lasting thing to come out of the “College Rock” era. Hopefully these reissues help a younger generation discover the band and their music. And rest assured, in our world of indie credibility, this little band from Minneapolis will forever remain the classic underachievers.

Dictated but not read by thestarkonline at 6:03 PM

This is great. I too came of age during the Replacements era - thought they did a nice job with the reissues.