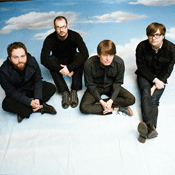 Love 'em, hate 'em, or don't care, long time "indie" band Death Cab for Cutie moved 144k copies of their new record Narrow Stairs (Atlantic) last week to bow for the first time at #1 on the Billboard Top 200. Their previous record Plans debuted at #4, selling 90k. Death Cab's tally last week brings to the forefront many questions about the role of "indie" cred in the marketplace today. They join an ever-growing list of artists including Modest Mouse, Arcade Fire, and Feist who have achieved commercial success while still garnering attention and praise from the elusive blog community. A band like Death Cab further blurs the definition of "indie", and what does or does not qualify as pop music today. Is there really any difference?

Dictated but not read by StarkNY at 11:05 AM