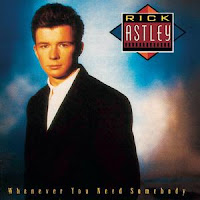 Ya gotta believe in rickrolling. Admittedly, I didn’t – until the New York Mets got rickrolled. For the uninitiated, one is said to be “rickrolled” when persuaded to click a link for a given topic, but actually directed to a website featuring the video for Rick Astley’s 1988 hit “Never Gonna Give You Up.” Rickrolling also describes playing the Astley song loudly in public in an attempt to be disruptive. While I understood the concept, it didn’t strike me as funny to click a YouTube link and have a long-forgotten 80s hit annex my computer, or even to randomly blast the song upon unsuspecting listeners.
But then the Mets announced a sing-a-long contest. My home team has been shamelessly ripping off the Red Sox and playing “Sweet Caroline” during the 8th inning at home games. Catchy song, but this is New York, and there’s no reason to mimic an inferior city. So the Mets presented their fans with new sing-a-long choices – 10 total, with an 11th write-in option – noting that the voting would “help determine” a new sing-a-long tune.
Many of the choices fronted by the Mets organization were laughable – “I’ll Be There For You” by the Rembrandts? We all know the words, but who wants to hark back to a 90s sitcom in the middle of a baseball game? Also, a perky pop jingle about getting through the bad times probably won’t do much to inspire a team or a fan base very much in need of inspiration after last year’s epic collapse. “Movin’ Out,” by Billy Joel, was another option. The Mets are moving out of Shea Stadium at the end of this season, and a Joel concert will be the last event held at the venue…marketing ploy, much? But competition was revived when Fark.com readers caught wind of the contest and encouraged people to write in Rick Astley’s “Never Gonna Give You Up.” And more than five million did, making the 80s anthem the overwhelming winner. Team officials were forced to fall back on the ambiguity of their contest language, and while they declared the song the victor in terms of votes, it will likely not be chosen as the new 8th inning refrain. Instead, the Mets will play the top six songs at the first six home games of the season and pick the champion based on “fan reaction.”
As the technical winner, “Never Gonna Give You Up” was the first song played at Tuesday’s home opener and fan reaction was strong and spiteful. That said, things were looking bleak by the time Rick’s voice blared from Shea’s speakers. Despite my initial failure to embrace rickrolling, I now wonder if this isn’t the perfect song for beleaguered, yet loyal supporters to rally behind: “Never gonna give you up/ never gonna let you down/ never gonna run around and desert you/ never gonna make you cry/ never gonna say goodbye/ never gonna tell a lie and hurt you.”
Were truer words ever spoken? Should not the sing-a-long serve to inspire both players and fans? Should we instead continue to draw attention to our previous letdowns and fears of the future by choosing a song with telling lyrics such as Bon Jovi’s “Livin’ On a Prayer” or the Foundations “Build Me Up, Buttercup?” Mets fans, heed the immortal words of Rick Astley: “A full commitment’s what I’m thinking of…Don’t tell me you’re too blind to see.”
- Ashley Herriman (guest contributer to Stark)
Dictated but not read by StarkNY at 11:59 AM

noname in a narrownook said...

i think that's a wonderful choice for the 8th inning singalong, but only if they play the video along with it. love the belt.