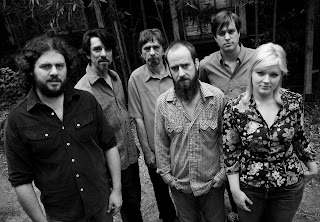 " We've been in for five days now, but tonight, it's time to take the rubber off," said DBT lead singer Patterson Hood. The quote served as a preface to the instrumental, vocal and energized attacks off a band, seemingly sick of recording.

After an under-attended, but highly active set from The Whigs, who hail from , (you can guess why they're the opening act,) DBT took the stage, on time no less.

Jack Daniels (the seventh man,) accompanied the band as per the usual. There to share in the “JD buzz” was prominent pianist Spooner Oldham, who recently played on DBT's newest album Brighter Than Creations Dark. has played with such music figureheads as Duane Allman, Bob Dylan, Janis Joplin, Gram Parsons and Townes Van Zandt — add the Drive By Truckers to that list now as well. Discreetly placed towards the back of the stage, Oldham receded, but his piano added a muddled-nostalgia that was complimented well by DBT band members.

Two red-eyed-angered swans occupied stage left and right, both of which were seemingly colored in by drunken roadies minutes before the set.

Mike Cooley, lead guitarist and vocalist, established his dominance to the right of the stage, while bassist Shonna Tucker (to the left of him,) seemed to have gone in search of herself. Throughout the show, Shonna seemed drunk at best, with her bass lost amongst the kick-drum of Brad Morgan. However, there was still something seductive in her presence. Hood, as always, conducted business as usual from center stage.

For a venue that once played host to E-induced ravers, Terminal 5 was graced with a different crowd. Comprised of three bar-backed levels, DBT did well to fill the venue.

Brighter Than Creations Dark was undoubtedly and unsurprisingly the focus of the night's performance — the album is arguably their best since the 2004 release of Dirty South.

The heavily distorted, rich feel of Hood's guitar pierced ears as he fired into the first song of the night, "The Righteous Path," a track three selection off their new album. Hitting a second gear, DBT streamed into "Where the Devil Don't Stay," off of Dirty South — the crowd reacted well to this classic. The next five songs of the show were off Brighter.

DBT seemed uneasy, unsettled and timid throughout the first few songs —Hood was motioning to the soundboard technician adjusting volumes and John Neff, who has occasionally played with the band since its creation, seemed out of place on stage.

Neff played both the pedal steel and guitar, however his button-down flannel shirt and combed-over blonde hair did little for his stage presence, which was noticeably lacking — he needed more whiskey. To add to the awkwardness, Neff played most of the signature Cooley-guitar solos.

Sans some main solos, a blonde in the stage right balcony broke down the expressionless face worn by Cooley on most nights — no solos, more flirting. Grabbing those around her, motioning wildly, the anonymous blonde was 15 years old again as she literally threw herself at Cooley. Smiling occasionally and looking her way constantly throughout the show, Cooley lit up another cigarette and went back to work—he is a professional and had a job to do.

The third song of the set, "That Man I Shot," is one of the most powerful and hard-hitting songs off the new album — it gave way to a classic Cooley track, "Self Destructive Zones."

"Putting People on the Moon" changed the pace of the show, played with an unusual double time feel. Fan favorites such as "Hell No, I Ain't Happy," Carl Perkins' Cadillac," "Sink Hole," and "Women Without Whiskey" were sporadically placed amongst newer songs throughout the night.

Trying to keep pace with the band's energy and alcoholism, the crowd realized that $6 for a Tecate served in a frat cup wasn't too bad. I actually think beer sales went up when Hood blasted out the first chords of "Let There Be Rock," which marked the end of the first show and the beginning of the second — the encore.

The six-song encore is beginning to become a DBT staple. Usually populated by the same mix of songs, "Shut up and Get on The Plane," "," "18 wheels of Love," and "People Who Died," tonight's encore was no different. An asterisk is placed on "18 Wheels of Love" however, where as Hood divulged the full life story of , his mother's truck-driving husband. In short, was on his deathbed with one final wish, to drive again. Knowing true love, Hood's mother obliged 's dying wishes and "tonight, well he is driving somewhere across the ," Hood said. "And every goddamn word of this is true."

For those who have not seen DBT before, the show was an energy-packed, whiskey-filled experience they'll never forget. For long time DBT fans, well, the show was simply a success.

Dictated but not read by thestarkonline at 10:50 AM

I heart this review Vince