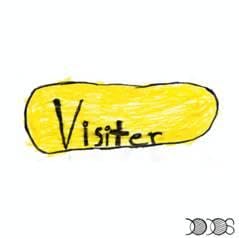 For fans of , Arcade Fire, Animal Collective, José González and John Stainer (the drummer for the Battles.)

Meric Long and Logan Kroeber are the West Coast creators of The Dodos. The duo hails from , where they managed to merge forms of, you guessed it, indie-folk-pop, and Americana-bluegrass, with the West African inspired drumming of Kroeber. Visiter incorporates banjo, mandolin, finger picking acoustic guitar and percussion. Songs like "Walking," and "Undeclared" are delicate in their presentation — harmonized vocals are laid atop acoustic-guitar riffs (seemingly inspired by Levon Helm's Dirt Farmer) and a kick-drum propelled backbeat.

Changing pace, as the album does quite frequently, tracks such as "Jody," "The Season" and "Paint the Rust" rely heavily upon the drum-rimmed beats of Kroeber and full bodied, more pop oriented vocals of Long — here is where the Arcade Fire reference comes from. "Paint the Rust" dips so far into the country-rock genre, that it lends itself to songs off Howl, the down and dirty, slide-guitar themed, Black Rebel Motorcycle Club album.

On ballads like that of "Park Song" and "Ashley" Kroeber's vocals are, at times, eerily similar to that of José González.

With such an eclectic mix of musical styles, influences and genre elements, The Dodos created an album that appeals to even the most timid of listeners as well as the seasoned vets. Look for this album on some of the "Best of" lists to come.

Dictated but not read by thestarkonline at 10:21 AM