Comprised of 19 songs and totaling 80 minutes, Brighter Than Creations Dark is a bold offering. On this, their sprawling, surprisingly cohesive and often compelling follow up to last year’s lackluster A Blessing and a Curse, the Drive by Truckers return to what they do best, offering striking, heartbreaking, and at times outright funny caricatures of the people and places of the American south. 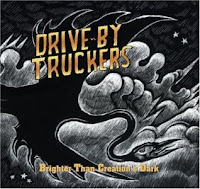 Yet, while seemingly pigeonholed by their accents and weeping pedal steel, top notch songwriters and longtime friends Patterson Hood and Mike Cooley transcend the limitations of a specific region by delivering songs that capture the sentiments and conflicts of families and individuals throughout America.
Somehow, the textures and stories interwoven throughout the album sustain listeners through the unavoidable pitfalls of such a long record. While admitting that even some of the best albums in the Rock and Roll cannon come with some filler, Patterson Hood has stood by the record in interviews, claiming that the thematic sweep of the album prevented the band from cutting some of the weaker tunes. Gems such “3 Dimes Down,” “That Man I Shot,” and “Self Destructive Zones” keep the listener engaged and curious as to what’s next, even in the face of lyrical-low points on songs like, “You and Your Crystal Meth” and “Home Field Advantage.”
For the first time since the band’s high water mark of Decoration Day, Hood’s songwriting stands up against the critically underrated writing of Cooley. “Two Daughters and a Beautiful Wife” finds a surprised man looking down from heaven at friends and family coming to mourn his death. A lilting banjo weaves through the song highlighting the laments of a father longing for a Saturday morning in bed with his daughters and wife. 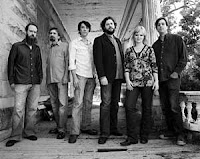 Hood looks to the fate of what are now fatherless children in the gripping portrait of foreign war in, “That Man I Shot.” Hood’s writing often captures the anxieties, fears, happiness and sadness of domestic life in America, but on Brighter Than Creations Dark, it is stronger than ever.
In past records, Cooley’s songs have had the longest shelf life. When the ringing guitars of “Let There be Rock” and “Sink Hole” have faded, one turns, again and again, to the weary melancholy of “72 (This Highway’s Mean,)” “Sounds Better in the Song,” and the powerful “Where the Devil Don’t Stay.” While the true test of Brighter Than Creations Dark can only come after many more listens, Cooley’s humor and melodic levity shine. Cooley can pull off seemingly cringe-inducing lines such as “Bob ain’t light in the loafers / he might kneel but he never bends over” while Hood’s “I used to love you but now you suck” falls flat. Cooley continues his role as the reckless troubadour, with songwriting always tinged with true sadness and loss.
Although told through the stories of others, the songwriter’s personal struggles of balancing family life and road life are clearly on display here. One can’t help but see some of Patterson written into the father figure “trying to keep focused…on the ditches and the curves and the heavy load” in “The Righteous Path.”
For her part, Shonna Tucker, bassist and ex-wife of former “Trucker” Jason Isbell, contributes several tunes and shares in the vocal responsibilities. Unfortunately, she does little to fill the void left by Isbell. Luckily, Cooley and Hood show up in fine form.
Brighter Than Creations Dark shows a band taking risks and looking to the future. This is a positive sign. Although it could have used a few more classic driving rock tunes, the album shines as a showcase for songwriting, and that has always been what the Truckers do best, regardless of volume.
http://www.drivebytruckers.com/
Dictated but not read by StarkNY at 10:30 AM