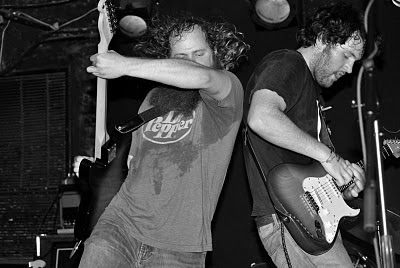 [mp3] Futurebirds: "Johnny Utah"
We here at Stark are thrilled to be presenting one of our favorite new bands to watch, Futurebirds, alongside a Stark-staple, the always fantastic Blair, tomorrow at Cake Shop. We caught Futurebirds' all out country-rock salvos at Mercury a few months back. These Athens, Georgia natives have returned to NY again with their fantastic debut record Hamptons Lullaby freshly released on Autumn Tone. After hitting New York, The Furutrebirds will set out on an extensive run with the equally amazing Dead Confederate whose new album Sugar drops August 24th. We recently caught up with several Futurebirds via phone from a highway Sbarro somewhere in the middle of Ohio. We discussed the Athens sound, pretty girls, touring, and of course, country music. Read the convo after the jump.

We noticed, just from the first few minutes of your live set, that it's a good deal different and louder than your more nuanced recordings. What's the thought process behind that?
Payton: There is definitely a different thought process that went into making the record and EP than goes into playing live. Live, you get a little more time for spontaneity – and a lot less time to think about things when you go on stage -- which can be a good or bad thing honestly. We have a great time on the road and playing live. It’s interesting seeing how different a show can be from the night before – the crowd – the city – being in the studio was fun though – not to discount that at all – it’s just a totally different thought process.

What are the best and worst things about being from Athens, GA?
[The question is put to the rest of the band, sitting around the Sbarro dining table. There is a muffled voice in the background, some shouts, some laughing, it's not clear where the answer comes from, nor its precise wording - but we believe the quote resembles: "The best thing, well, there are a lot of pretty girls in Athens - they stay young - and we just keep getting older and creepier too!" More laughs and self deprecating jokes ensue before the conversation returns to its original course...]

Well, the one good thing is there is not really one Athens sound. There are all kinds of genres that are coming out [of Athens]. It’s helpful that you're not under one label. When people hear you’re from Athens they know you’re coming from a rich musical culture, but don’t have one distinct Athens sound.

[Brannen takes the phone]
How is NY different than most places you play?
New York, there is so much going on everywhere – it’s like being a kid in a candy shop – we were all sort of caught off guard – we all love it there. Athens and NY crowds are about the same really, both are pretty open to all sorts of different musical styles.

At your last show we noticed a pretty unique audience consistency, a lot of pretty girls, decked to the nines, in heels - not your usual Mercury Lounge crowd. Are all your audiences like that?
Haha well, there are a lot of girls that used to live in Athens and moved up to New York for work, and they like to come out and support.

Is it going to be like that on Wednesday?
I’d like to think so haha we’ve been looking forward to this date for awhile now.

Do you guys have any weird band influences? Does anything odd come up on in the van on the radio now and again?
Well, we change it up on certain trips, definitely some random stuff on random channels. We have XM and it stays pretty much locked on the country channel though. A lot of Gillian Welch and Rolling Stones. We've been really into the new Big Boi – that might be a weird one coming from us.

What's the Futurebirds road life like? Parties every night? Yoga in the morning?
Haha - usually depends on how the night goes – go out, or go home and take easy – sometimes you think you're gonna take it easy and you get back to the hotel and just end up going out.

Good road stories?
Well the other night we stopped at a gas station, somewhere in the middle of Indiana outside the Lincoln Lodge – and I was out in the cornfield – snapping corn out in the middle of the field – I just really wanted some fresh corn. I cooked it up last night, and it was great haha.

What’s next? [Carter takes the phone]
A little bit of writing – we got a few weeks off in the beginning of August – after these shows w/ Dead Confederate which are going to be awesome. I think we have three weeks off – then go out again – we’re thinking of setting up a homemade studio somewhere because our writing process is such where someone will have an idea for a song then when we all start adding in different ideas so it helps a lot to start recording. Definitely a lot of pool parties – down time. I'm watching second season of The Wire – Dennis and I are moving into a new apartment when we get back that's in the same complex as some of the Dead Confederate guys, so that should be a good time. We're all kind of livin in different places, but not that far away from each other which is nice. After being in a suburban for weeks on end though, you can definitely use some time away from each other haha.

Dictated but not read by thestarkonline at 2:48 PM